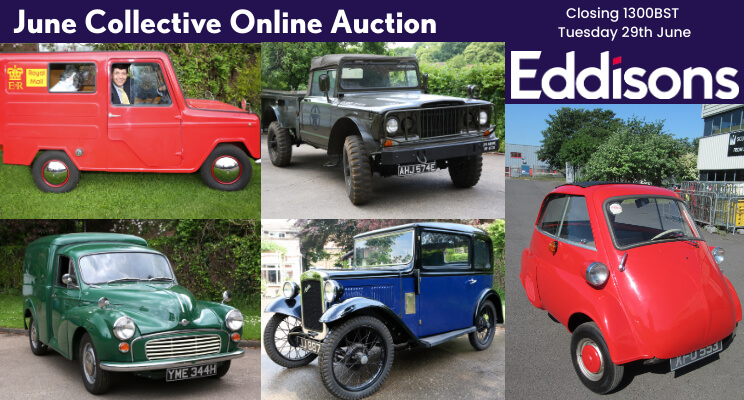 Classic cars and vans from the private collection of a North Lincolnshire historic vehicle restorer are to go under the hammer in a spectacular sale at the Eddison CJM Auction Centre in Scunthorpe on Tuesday June 29th.

The now retired engineer created the amazing collection by taking on restoration projects that had defeated other would-be restorers.

However with his garage space now jammed with two vintage Rolls Royces . . . a fleet of other British classics dating back as early as the 1930s . . . a four ton American military truck . . . a French scooter van . . . and a London taxi . . . not to mention the modern car that he actually drives down to the shops . . . he has now decided to create a bit of space and thin things out a bit.

Auctioneer Paul Cooper said: “It is one of the most extraordinary, eclectic, classic collections we’ve ever seen. Apart from being old and rare, just about the only thing the vehicles have in common is the fact that they were almost all in bits when they were acquired – and they’ve now been saved and brought back to quite remarkable condition.”

“As a result of the re-appraisal of the collection we will be auctioning a number of the vehicles including a 1967 Kaiser Jeep M715, a 1933 Austin 7, a 1970 Morris 1000 van and a 1967 Lambretta Willam, one of the little scooter-powered French delivery vans.”

Paul added: “ The Kaiser Jeep, an American light military truck, is expected to be one of the stars of the show. Just 30,000 were manufactured and they were sent to bases and war zones around the world, so survivors are a bit of rarity.”

“A North Yorkshire farmer bought this from a sale of surplus military equipment in Catterick and, despite the low mileage, decided to dismantle and rebuild it. Unfortunately he never got further than the dismantling bit. However it is now fully restored – and still has less than 7,000 miles on the clock.”

“The Morris 1,000 van was another abandoned restoration project although in this case the condition was so poor that there had to be a major chassis up rebuild involving new floors, bodywork panels and wings. It took several years but the result is an iconic vehicle in exceptional condition and, since the original engine had disappeared, the opportunity was taken to replace it with a 1300cc Marina motor, so it doesn’t just look pretty.”

“The 1933 Austin Box 7 is one of the quaint little cars that brought motoring within the reach of the British middle classes for the first time. JJ 874 was in bits in a shed in Wales when it was picked up via Ebay – another restoration project that was started but never completed. The 88-year-old car is now fully rebuilt, gleaming, and in expert hands is capable of ripping along at a heady 40-45 miles an hour. Not much slower than its 1930s top speed.”

Paul said: “The most comical entry is a 1967 Lambretta Willam, one of the little scooter engine-powered delivery vans that were that were really popular in France half a century ago, not least because you could drive one without needing a proper licence.”

“The thing about the Willam is that everyone looks at the shape and thinks ‘Postman Pat’. So in rescuing this vehicle that is just what our restorer did. He also changed it to right hand drive and replaced a half-missing scooter engine with a Reliant Rialto motor – that will get Pat and Jess (his cat) through their round in half the time.”

The Collective Auction on June 29th will also include a 350cc Royal Enfield motorcycle that has lain undisturbed in a Lincolnshire farm shed for three decades. It has just 24 miles on the clock. Another entry is a 1960 Isetta bubble car that has been owned by the same family for the past 38 years. It has less than 10,000 miles on the clock.

The viewing session for the auction is on Monday June 28th (10am-4pm). The online sale is scheduled to close at 1pm on Tuesday June 29th.