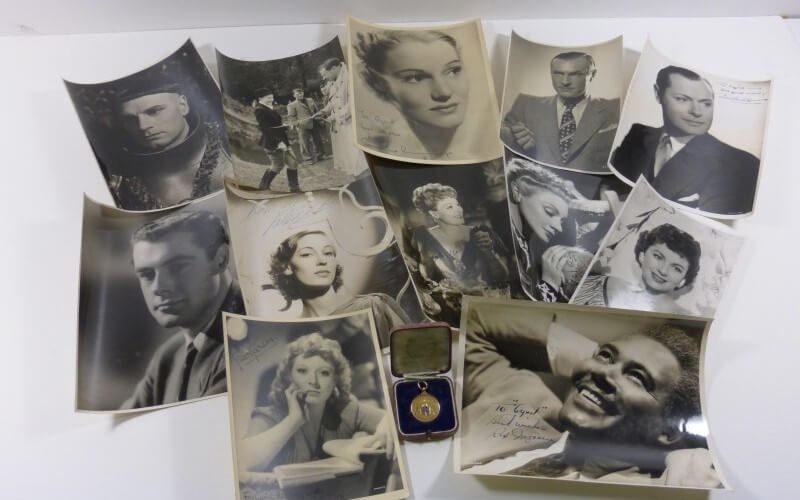 A rare medal and a collection of autographs featuring screen icons John Wayne and Laurence Olivier, plus football legends George Best, Sir Tom Finney and Sir Geoff Hurst, is expected to attract widespread collector interest when it goes under the hammer in a specialist auction of autographs and sporting memorabilia in Scunthorpe next week.

The rare medal was used as a good luck charm on a gold bracelet for decades, however the ‘good luck charm’ is in fact a rare piece of pre-war footballing memorabilia – a gold winners medal for the 1932-33 season final of the Durham Football Association’s Senior Professional Cup, a long defunct competition for the top teams in the North East.

The competition that year was won by Sunderland FC and the medal was awarded to Cyril Beach, who played as an inside forward in the game. It has been entered into the auction by a member of the family who discovered it – attached to the bracelet – amongst jewellery inherited from Cyril’s wife Vera a number of years ago.

Howard himself died in Brigg in 1994, just weeks short of his 85th birthday, after a spectacularly interesting career that took in not only football but also the film industry. After a season at Hounslow Town, a non-league club, he joined Second Division Charlton Athletic, before being signed by First Division Sunderland for the 1932-33 season. It was to prove a step too far. He made just a handful of first team appearances but he did play in the Durham Senior Professional Final and win the medal.

After that it was back to non-league football and the other career options that even the top football players of the time had to consider when their playing days (£10 a week maximum) were over. In Howard’s case it was the British film industry in which he would work as a camera operator.

That second career has produced another interesting entry in the auction, a collection of a dozen signed portraits of the famous film stars of the post-war years with whom he worked. They include Laurence Olivier, Margaret Lockwood, Greer Garson, Robert Montgomery, Richard Greene, Constance Cummings, Valerie Hobson and others.

The auction next Wednesday (15th August) also includes signed photographs by John Wayne and Bing Crosby that have been entered by another collector.

Meanwhile back on the topic of football, the sale also includes the best Grimsby Town-related autograph collection we’ve ever seen. Half a century in the making, it started back in December 1956 when a four-year-old boy was taken to see Grimsby Town play Bristol Rovers in the old Second Division. The mariners won 3-2 and the boy was hooked, starting collecting autographs soon afterwards and continuing until 2007 when his own son, another fan and collector, joined the army.

However not only do the hundreds of autographs cover the players of that period but they even managed to get the signatures of some of the members of pre-war teams including Max Holmes who played in the side that came 5th in the First Division in 1935. (Who later became the collector’s sports teacher at Hereford School.)

There are also the autographs of many of the greats of the game that were collected at various events including Sir Stanley Matthews, Sir Tom Finney, Nat Lofthouse, Sir Geoff Hurst, George Best and others.

The sale also includes an impressive collection of limited edition aviation prints including a number by Robert Taylor, the world’s leading aviation artist, almost all of them signed by pilots and squadron members.