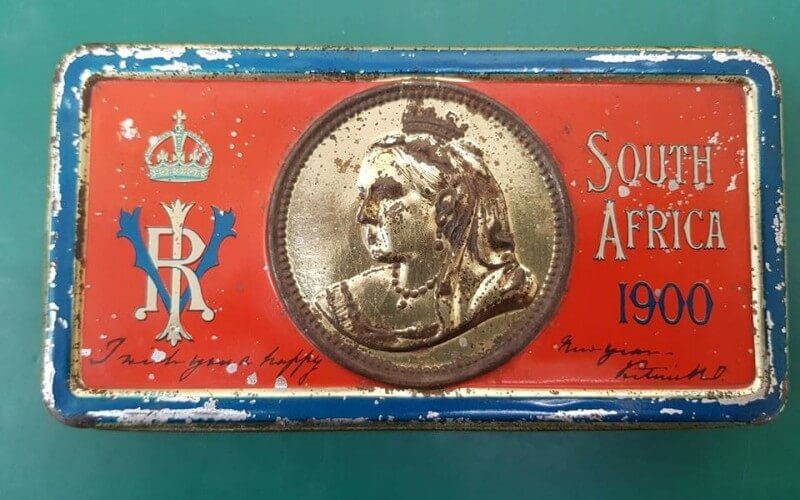 One of the tins of chocolate that triggered a right Royal rumpus involving Queen Victoria and all three of the country’s leading chocolate makers featured in our Antiques & Collectors Auction.

During 1899 the Queen decided that to cheer up her troops engaged in the Boer War (which was going rather badly at the time) she would send them all a New Year gift. Cadburys, who held the Royal Warrant as suppliers of cocoa and chocolate products, were asked to produce the blocks of chocolate for the specially designed tins.

Simple as it might seem, the order posed serious ethical difficulties for the Cadburys: They were Quakers, as were their rival chocolate manufacturers the Frys and the Rowntrees. They were also pacifists, they were opposed to the war and they had no desire to put themselves in a situation in which they could be accused of profiting from the fighting. On the other hand neither did they wish to go head-to-head with the Queen Victoria and the Imperial Establishment in the middle of a conflict in which the lives of Empire soldiers were being lost.

To resolve their dilemma Richard and George Cadbury formed a temporary alliance with Joseph Fry and Joseph Rowntree: The three firms agreed to work together to fulfil the order. They would donate the chocolate free of charge and there would be no branding on either the chocolate or the tins.

Queen Victoria was not amused by all this. She wanted her soldiers and sailors to know that she was sending them the best British chocolate. In the face of the Royal ire, the firms took the sensible course of action. They caved in. Sort of. The tins remained unbranded but some of the chocolate and some of the interior wrapping sometimes did bear a company name.

The Boer War chocolate gift tin that featured in our Antiques, Collectables and Homewares Auction had been entered as a result of the international media coverage of the inclusion in a previous auction that featured a World War 1 hero’s 1914 Colonies Chocolate Gift Tin that still contained nine of the original chocolate bars.

The chocolate, originally a single block, was somewhat broken up but it was all there. Interestingly, although it didn’t look quite as attractive at it once did, it managed to retain a trace of chocolate aroma.

It is by the way Cadbury’s chocolate. Although neither the tin nor the chocolate are branded, Cadburys, Frys and Rowntrees had their tins made by different firms and there were slight differences that enable them to be identified.

The gift tins went down a storm with the soldiers fighting the war in South Africa. It was the first time that any of them had received a present from the Queen. They were treasured. Many sent their tins home for safekeeping. Bids of as much as £20 were rejected by soldiers earning a shilling a day. Back home a swindler was jailed for six weeks after selling hundreds of tickets in a fake raffle that claimed to have one of the tins as a prize.

The result of all this is that Queen Victoria’s 1900 Chocolate Gift Tin is not quite as rare as you might imagine, although it is pretty unusual to have all the contents intact. The First World War Colonies Chocolate tin and contents we auctioned sold for £3,000, but it was part of a larger lot that included a Distinguished Conduct Medal and other memorabilia. Examples of this even older treasure usually sell for £50 – £300, depending on the condition of the tin and whether or not the chocolate is still inside.

If you have any antiques or collectables, and would like to find out how much they could achieve at auction, please contact us on 01724 334411.