Home / News / Continuing On Our Activity

Continuing On Our Activity 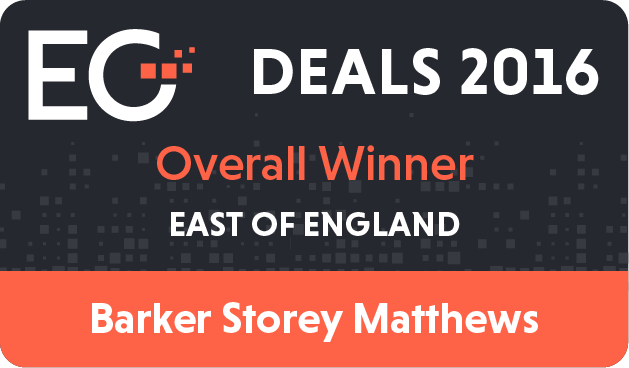 Once again Barker Storey Matthews now part of Eddisons has been identified as one of the UK’s most active agents when it comes to securing commercial property deals. As we head towards the end of Q1 2017, the number crunching of last year’s deals has been completed by commercial property research specialists EGi with Barker Storey Matthews awarded the accolade of East of England Overall Winner in its EG Deals Competition 2016.

Continuing On Our Activity

It is the fourth year in succession – so that’s every year since 2013 – we’ve occupied the top slot in our region of operation when it comes to deals activity and, gratifyingly, it’s the second consecutive year in which we have had top billing in both the industrial and office sectors of the competition.

The competition is open to all agents, including national firms, who complete deals involving Commercial Property in Cambridgeshire, Suffolk and Norfolk and it assesses the volume of deals across the five main commercial property sectors: office space, industrial buildings, shop property, investment property and leisure/hotels across the latest calendar year.

Who knew what lay ahead when the calendar page turned to 01 January 2016? It is only 13 months since the EU referendum was announced.

Admittedly, we are fortunate to operate in one of the UK’s most prosperous regions but that means so do a number of other high calibre agents. Each transaction we secure on behalf of clients is hard won from instruction through negotiation to completion.

Success in this competition is a testament to the hard work and determination of our sector specialist agents on the ground across our four offices in the region, at Peterborough, Huntingdon, Cambridge and Bury St Edmunds. While our active performance in the industrial units and office space sectors turned in the star performances for us in this latest competition – the latter sector improved as the year progressed – we were runners-up for the number of deals in the shop property sector and just out of the running for the top three in the investment deals category.

This year looks like being another busy year with active demand for commercial property at a continued strong level as Q1 ends and Q2 begins.